No one wants to think about dying. In fact, this may be why it’s hard to think about where our money and most valuable possessions will go once we’re gone.

While some people might decide to leave their money to beloved pets, others may divide their remaining assets among family and friends through their last will and testament in the event of their passing.

We surveyed more than 300 Americans aged 45 and older about their last will and testament — whether they already had one in place, how they would choose to distribute and divide their inheritance, and if they felt it was fair to give more to family members they liked better. Curious what most people think when drafting their wills? Keep reading to find out.

How Many People Have Drafted a Will? Regardless of age, having a will is important. If you do not have one and pass away, your assets will be settled by state law (which often doesn’t take the deceased’s opinion into account). While certain equities prevail over a will — joint holders will receive the funds from a jointly owned bank account or home — most states default to “using a hierarchy of survivors” if a will isn’t drafted, starting with the spouse and then moving on to the children.

According to survey respondents, more than 1 in 3 people don’t have a will in place. However, percentages were higher among those with children — a little more than 22 percent did not have a will at the time of our survey. We next asked participants with a drafted will how they decided to divide up their assets.

The most common factor considered was whether a recipient could handle their finances wisely. Like Gordon Ramsay or Bill Gates who have famously said they won’t be leaving their vast empires to their children, sometimes there are more important things to consider than whether someone is related to you.

Of course, nearly 1 in 5 people distributed their possessions based on whom they thought were good family members. Nearly 12 percent said they left money to family members who kept in touch, and 11 percent arranged to leave their assets with people they found to be kind-spirited. Less than 7 percent said they were concerned with someone being charitable. Only slightly more than half of those surveyed said they had a good relationship with everyone to whom they left their assets. When it comes to dividing up your estate, the final decision sometimes goes further than who you like. For nearly half, their final decision was as much about the type of asset as it was about the person.

Less than 8 percent of people did not want to offend anyone — perhaps because they felt they divided their assets fairly among friends and family, or wouldn’t know either way if they had disappointed someone.

Deciding Who to Leave Out What are the top reasons for excluding someone from a last will and testament?

For more than 1 in 4 people surveyed, it boiled down to not having spoken to that person for an extended time. Despite being a friend or family member, absence does not make the heart grow fonder during the writing of a will. For a similar number of people, they would exclude someone who committed a serious crime.

Almost 25 percent of respondents would exclude someone from their will if they were thought to have a generally cruel disposition. Other common reasons for crossing out a name included the inability to handle finances, not keeping in touch with family and caring too much about personal wealth. 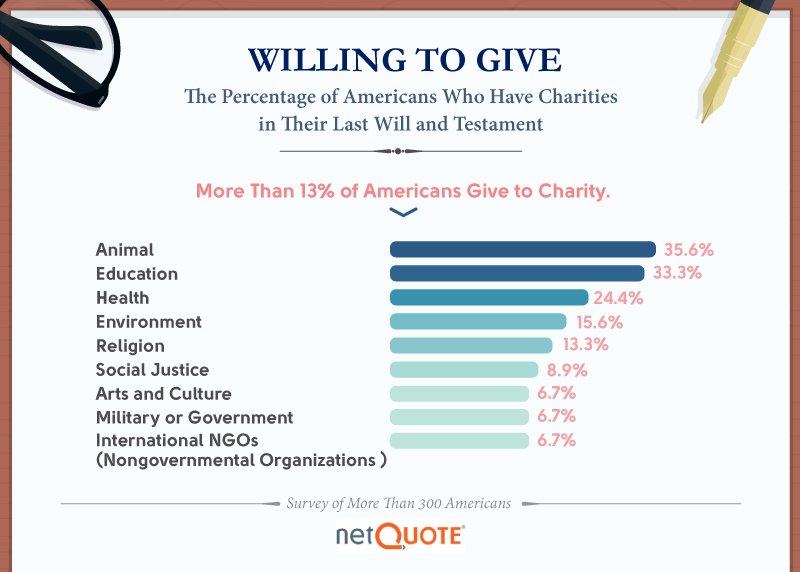 Less than 14 percent of people said they were bequeathing any part of their finances to a charity. Celebrities, such as Simon Cowell and Warren Buffett, have said they plan to donate a majority — and even all — of their wealth to charity when they die, but most Americans may not feel their family can afford such a giving nature.

For the few who arranged for at least one charitable organization to receive a part of their inheritance, the recipients were most commonly animals. More that 1 in 3 people who planned to donate to charity after they passed wanted to leave money to organizations that helped animals in need, while slightly less wanted to give money to charities focused on education.

Less than 1 in 10 were as concerned about arts and cultural organizations, international NGOs (like the Red Cross), or the military and government. Deciding whether your opinion of someone should play a role in drafting your will can be tricky.

Of respondents with children, exactly half believed it was fair to distribute assets based on whom they liked more in the family. We last asked participants if they had ever been excluded from a last will and testament and whether they thought it was fair to do so.

Of those who felt it was fair to distribute assets to whom they liked more in the family, nearly 76 percent had been cut from someone’s will.

Half of the respondents who told us family ties trumped personal preference when drafting a will had not been excluded.

Nearly 2 in 3 Americans aged 45 and older had a will in place. Who made it into a will and why was sometimes a bit more complicated, though. For some of the more than 300 Americans surveyed, it was about the person in consideration and their emotional attachment to that relationship. For others, dividing their assets was a more clinical consideration, and as much about the money as it was about the person.

Whatever the reason, making sure you have a quality life insurance policy can help alleviate the burden of distributing your assets once you’re gone. At netQuote.com, we provide free customized life insurance quotes across many major providers. We can even help you compare whole life policies and term life policies, so you get the coverage that’s right for you and your family. Visit us online at netQuote.com today to learn more.

Would your readers benefit from reading or sharing this information about the importance of having a will? We invite you to do so for noncommercial purposes only. When sharing or posting, please provide a link for your readers leading back to this page.