Could You Be Driving With Germs?

You’ll probably find yourself traveling in a rideshare vehicle, taxi, or rental car at some point, whether you’re on a trip or enjoying a night out. But comfy as they may be, you’re far from the only person who’s rolling down windows, buckling seatbelts, and grasping door handles and steering wheels in these vehicles.

We wondered just how bacteria-laden these types of vehicles are. To find out, we mobilized a team to hail taxis, request rideshare vehicles, and secure rental cars, and then we swabbed various surfaces in the cars (nine vehicles total) to gather samples. Just how many germs are sharing your ride? And what are the potential health implications? We’ve got the dirt on each type of vehicle below. 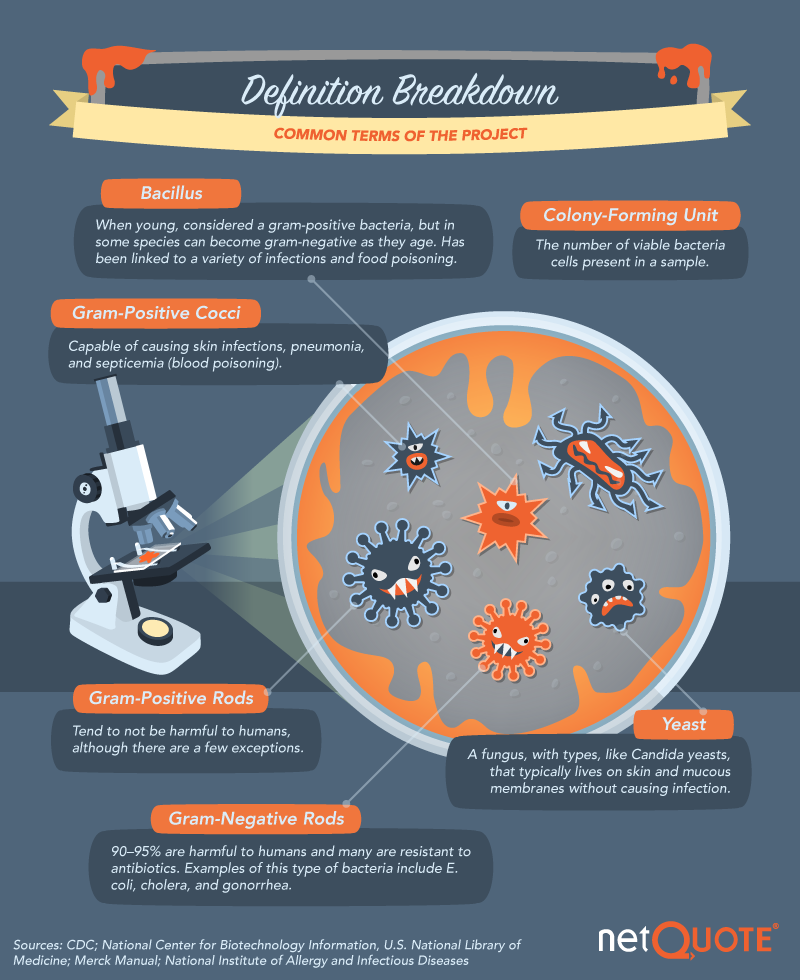 Not all germs are harmful – but their mere existence on surfaces indicates the potential for problems. The higher the bacteria level, the more likely that some of the microorganisms are harmful. In our study, we swabbed surfaces to find out how many colony-forming units (CFU) were present per square inch on each surface and determined the breakdown by germ type.

Our samples revealed the presence of various germ types – some of which are potentially harmful: bacillus (a type that can cause infections and food poisoning); gram-positive rods, including cocci (which is linked to skin infections, pneumonia, and blood poisoning); gram-negative rods (which tend to be harmful to humans); and yeast (which under the right conditions has the potential cause skin infections, especially in people with compromised immune systems). In the three rental cars we tested, the steering wheels and gear shifts yielded extremely high bacteria levels – more than 1 million CFU/sq. in. a piece. To put it into perspective, one study revealed that a typical steering wheel yields fewer than three microorganisms per square inch (more than 390,630 times more than our rental car steering wheels). The same study revealed a typical gear shift hosts 146 – meaning our rental car shifters were 6,829 times germier. On the other hand, the rental car seat belts – with only 403 CFU/sq. in. – were by far the cleanest surfaces among the three we swabbed. A closer examination of bacteria types in our rental cars reveals some surprises. The seat belts, which had the lowest bacteria levels, hosted almost equal amounts of yeast (48%) and gram-positive rods (46%), along with minimal bacilli and gram-positive cocci. The steering wheels were crawling with only gram-negative rods, and the gear shifts were rife with gram-positive cocci – making both surfaces (especially the steering wheel) potentially hazardous to your health. Looking at the breakdown of bacteria types in rideshare vehicles paints an interesting picture. Virtually all the germs on the seat belts were gram-negative rods – arguably the nastiest of the bacteria we tested for. More than half of the germs on the door handle were gram-positive cocci, and less than a third were bacilli. As for the window buttons, the distribution is more equal: Bacilli make up a little over 40%, and yeast, gram-positive rods, and gram-negative rods comprise 20% each. 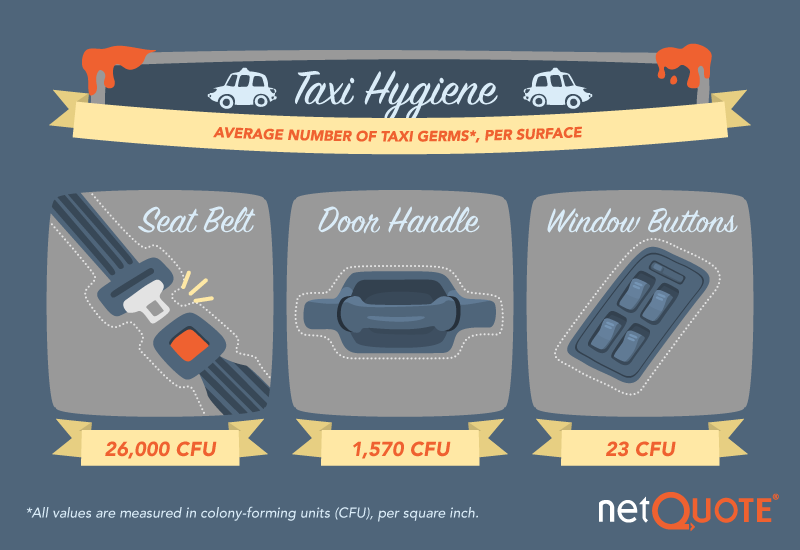 The taxis we tested harbored fewer germs by far than the rental cars and rideshare vehicles. The germiest surfaces were the seat belts, which contained 26,000 CFU/sq. in. – and the seat belts in the rideshare vehicles had 38 times more bacteria. The taxi door handles held 1,570 CFU/sq. in. (around 55 times more bacteria than in a typical car door handle) while the window buttons yielded a minimal 23 CFU/sq. in. Go ahead and get some fresh air! It’s only natural that a vehicle with an ever-changing roster of occupants would yield more bacteria than your own car. And our study revealed that more bacteria than you’d expect may lurk in some rideshare vehicles and rental cars, while taxis may err on the side of fewer germs. But our results don’t mean you should give up these vehicles altogether – in fact, you can easily take certain steps to protect yourself from a potential illness.

When you rent a car, take a moment to wipe key surfaces (such as the steering wheel and gear shift) with an soap-based wipe before you touch them. And if you’re riding in a taxi or rideshare, avoid touching your face and putting your hands in your pockets, as that can promote the spread of bacteria. Once you leave the cab or rideshare, wash your hands as soon as possible – and avoid touching your face until you do. Follow these steps, and you can sit back, relax, and enjoy the ride (or drive) – without worrying too much about the germs riding beside you.

Average Number of Germs Across All Surfaces, per Car Type

Average Bacteria Distribution Across All Surfaces, per Car Type

We then sent our swabs to the lab provided through EMLab P&K to analyze our results. They provided us back with the number of colony-forming units present on each of the surfaces we swabbed as well as a breakdown of the specific bacteria present. Using the numbers from each surface, we were able to determine the average colony-forming units and bacteria distributions for each surface and vehicle type in our sample.

Feel free to share the images found on this page freely. When doing so, please attribute the authors by providing a link back to this page, so your readers can learn more about this project and the related research.