Recent studies have shown excessive social media use exhibits many of the same behavioral cues as smoking or alcohol consumption, including mood swings, social withdrawal, conflict, and relapse.

Even if this doesn’t sound like a personal experience, consider this: The average person spends at least two hours every day using social media, adding up to over five years in our lifetime.

For many, that’s more time than they spend physically socializing with people. Are our digital lives that more entertaining that our in-person lives? It certainly gives reason for pause.

So how does all of this digital dedication affect our day-to-day lives?

More importantly, how does it impact the American workflow? After all, “time is money” according to the old saying.

How often do we sneak a peek at our phones when we should be doing our work instead?

To find out just how much of the average business day is dedicated to personal use of social media, we polled over 1,000 people currently employed in the U.S. people who all had at least one social media account.

We asked how often they check in on each social media platform while on the clock. The answers were a bit surprising.

Ultimately, we determined just how much work time is wasted on social media, which industries and levels of employment are the guiltiest, and even discovered additional digital distractions that many Americans admit to.

Read on as we explore these social susceptibilities and their impact on productivity in the workplace. It’s going to know what’s going on, but our digital lives seem to be here to stay. It’s safe to say that not every hour spent at work is productive. The average employee spends over four hours each day checking his or her email, and there are bound to be a few wasted minutes here or there over the course of all that correspondence.

But what about digital distractions? The kind you could be experiencing right now as you read this? If you’ve ever wandered back to social media throughout the workday, you’re not alone.

More than 2 in 3 people admitted to posting on social media when they should be working. Even though your boss may not approve of creating social connections with your co-workers (except through professional networks like LinkedIn), they might see your social activity anyway and know what you’re really up to while at your desk.

Perhaps even more distracting, nearly as many people admitted to shopping online while on the clock. While some workplace distractions can help boost productivity throughout the day, loading up your shopping cart might not be one of them.

More than 2 in 5 people additionally took selfies at work, and over 1 in 10 said they’d gotten into an argument on Facebook, sent out secret pictures or videos of co-workers, or messaged someone via a dating app during office hours. Ninety-five percent of working people admitted to using social media for personal use while at work, and most might think a quick glance here or there isn’t really so bad.

Until you realize how quickly those glances start to add up.

Factoring in only employees who used each type of account, we calculated the average number of business days lost to personal social media use by account type. In the end, YouTube accounted for the biggest loss of company time. In fact, people who log into YouTube spend more time engaged daily than any other social media platform. At work, that adds up to nearly 17 days of lost company time.

Facebook came in a close second. Accounting for nearly 15 days of lost time on the clock, the few minutes here or there you spend liking posts and taking pop culture quizzes could equate to more than two weeks of vacation time.

Popular sites like Instagram and Pinterest also added up to several days of lost time, but some dating apps could be even worse. Adding up to almost 11 days of lost time, people using Tinder at work admitted to wasting more time swiping left or right than using Reddit (under 10 days) or Instagram (less than nine). Depending on the work you do, you (and your co-workers) might not be as susceptible to the pressures of social media. Social media marketing has turned into a profitable way to interact with new clients, but spending too much time online could be creating more distractions than leads.

On average, people working in real estate spent the most time using personal social media during working hours, adding up to eight hours and 36 minutes every week. This total time was primarily dedicated to Facebook and Youtube.

People working in technology were right behind real estate in terms of total time wasted. Techies spent more time on Facebook (two hours and 46 minutes every week) and YouTube (three hours and four minutes) on average than any other industry.

Only people working in science or hospitality spent less than four hours a week engaged with social media while on the clock. Wasting time at work on social media may sound like the thing you’d expect from new hires, but directors, general managers, and vice presidents admitted to spending more time online than entry-level contributors. 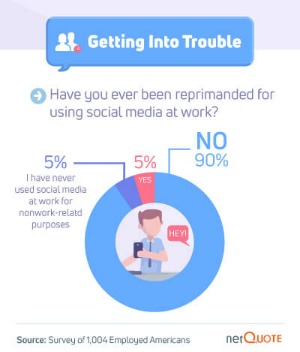 Averaging over seven hours and 30 minutes, people in some of the highest professional positions spent an average of three hours and 47 minutes every week on Facebook, followed by one hour and 12 minutes on Instagram and 57 minutes on YouTube.

As we found, experienced contributors were the least likely to spend excessive amounts of time slacking off on social media. Averaging five hours and 22 minutes of social media each week, they spent over two hours on Facebook and another hour and 37 minutes on YouTube.

Considering upper-level management and even directors were just as guilty of squandering company time on social media as entry-level employees, it’s no wonder so few people say they’ve been reprimanded for their social media use on the clock.

Of the people polled, 90 percent never got in trouble for perusing Facebook or YouTube when they were supposed to be working. Another 5 percent said they’d been called out for their digital demeanors, and 5 percent did not use social media at work for personal reasons.

Getting It All Done

Unplugging from our increasingly digital lives is sometimes easier said than done. Especially when a part of your job requires being plugged into social trends and online content, walking away from the web might not even be an option. Working people admitted to wasting hundreds of hours a year looking at Facebook, Instagram, and dating apps when they were supposed to be working instead. More common in real estate than any other industry, a vast majority of people were never reprimanded for wasting company time either. Still, turning off your phone and stepping away from the somewhat addictive tendencies of social media might actually make you happier in the long run.

Learning how to manage your employees’ social media use may be difficult, but deciding how to pay for their health insurance shouldn’t be. Whether you need insurance to help protect your small business in case of an emergency, health insurance, or commercial auto coverage, netQuote has the tools you need to save on coverage premiums. By comparing insurance quotes online in one easy-to-access location, netQuote makes finding the perfect policy as easy as updating your Facebook account. Visit us at netQuote.com to learn more.

We surveyed 1,004 Americans who were employed either part or full time in the United States and had used at least one social media account. Of these 1,004 participants, 51 percent were men, 49 percent were women, and less than 1 percent identified as a gender not listed in our survey. The ages ranged from 18 to 75, with a mean of 36 and a standard deviation of 11. No statistical testing was performed, and as such, these data are purely exploratory.

Looking to use this as your next workday post? Feel free to share it for noncommercial purposes as long as you link to this page so that our researchers, authors, and contributors receive proper credit.